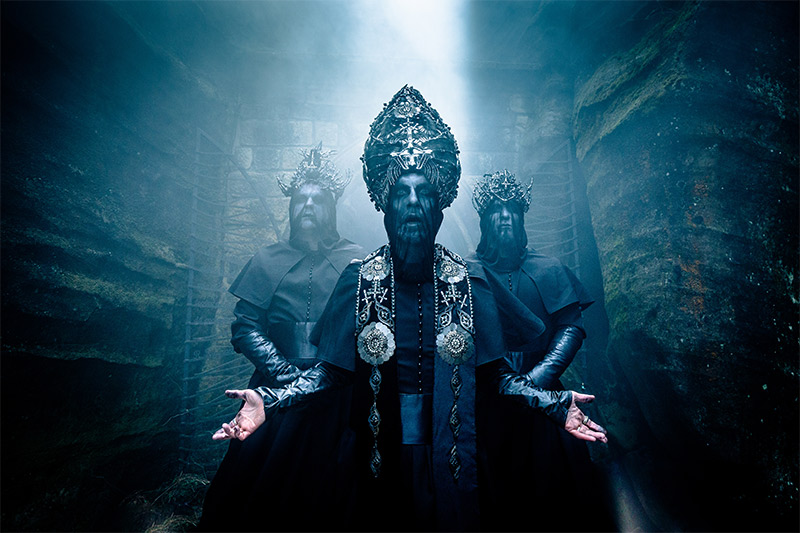 Following the release of their latest album I Loved You At Your Darkest, we enlisted the help of our mate Dave "Higgo" Higgins to have a chat with Behemoth frontman Nergal about the new record, touring with Slayer, and more. Check it out!

HIGGO: How are ya Nergal, ya well?

NERGAL: I hope I sound well?! What do you think?

HIGGO: Yeah sound fine to me

NERGAL: ha ha that’s cool man, I’m just enjoying my day off, not really doing much, other than, ya know, slowing it down a touch, relaxing.

HIGGO: Nice, where do we find you on your day off?

NERGAL: We’re in New Orleans, not really doing much, chillin, just did my yoga session for 30 minutes, we’ll go to the movies later, then on to another city, Atlanta tomorrow.

HIGGO: Nice, great to place to have a day off. We haven’t even done a proper introduction, oh I want to ask, now that you’ve legally made Nergal your middle name, does anyone call you Adam?

NERGAL: Oh some people do, for some reason whenever I go to Russia, they hardly ever say Nergal, they nearly always says Adam. It’s weird, like Nergal became my regular name, you know it’s in my passport, so there’s nothing weird about it, there shouldn’t be anything weird about it.

HIGGO: Now we should get onto the reason we’re having a chat today, and that’s because of the new album, I Loved You At Your Darkest, congratulations, it’s an absolute ball tearer.

NERGAL: Thank you so much, what’s your favourite song on this one?

HIGGO: If Crucifixion Is Not Enough is my favourite.

NERGAL: Oh wow! That’s cool because that’s pretty much one of the stand out tracks to me and not many people say that to me, people say to me Bartzebel, and Havohej Pantocrator and Wolves ov Siberia and you are only the second person that mentioned Crucifixion, which is cool, I like it!

HIGGO: I’m obsessed with it, I keep going back to it, especially around the 3 minute mark when it the guitar goes into a bend, followed by a riff, it’s just such a dark evil sounding part, I love it. There are other stand out parts on the album don’t get me wrong, Bartzebel being one of them, it’s almost a departure for Behemoth, but Crucifixion is definitely my favourite.

HIGGO: How do you manage yourself to not go back to the same well when recording Behemoth albums?

NERGAL: I think the way it goes is, we just develop that way, we just move on in that direction, it just happens really. We try not to over think it too much, we use the gut feeling to create stuff what feels like "hey, it’s me" and we manage to not repeat ourselves too much. On the one hand we’re faithful to our roots on the records and you can hear it, but then we know we can become adventurous whenever we feel like, and that’s it.

HIGGO: I think that’s good, so there’s no framework, it’s more a case of ‘let’s try this, let’s try that’ and make it work, is that how it kinda goes?

HIGGO: Do you find that if you come up with an idea, and it doesn’t work straight away, but you want it to, do you put it aside and come back to it or move on?

NERGAL: Ah not really. I mean I have so many ideas, like storming like rain all the time, so I’m like, ‘nah’. If I forget something or if the moment passes, I’m like ‘I don’t think it’s worth it’, to go back to it. There’s always something new coming. Usually, I think it’s way more exciting than digging back from the past and trying to redo it or something. Sometimes we do it, but in most cases, I like to try out new things and just wait and see which direction it flows in.

HIGGO: Well we spoke about my favourite in the album, do you have a favourite child that’ll hit you in a certain way when you get to play it live?

NERGAL: Now we’re playing this Bartzebel song which feels very fresh to play this one, because it’s very different, it’s new to us and people seem to be really digging it, and it’s maybe like the most very mellow part of the show, but very much needed too. But then again I dunno, we finished the show with We Are The Next 1000 Years that just goes straight into the outro and we’re doing drums sections, which is just epic, so there are a lot of moments that I would say are equal.

HIGGO: Just talking about Bartzebel, I read that it was the last to get lyrics, is that correct?

NERGAL: I didn’t have lyrics for that song when I was putting that song together in the studio. I started believing in it more, because earlier I didn’t even think that it would make it in the record because it was just some weird.. something. But I started fucking around with a section in the studio and I put it together and I was like "AAARgh", it might actually be a great song. But I’m missing lyrics.

So I reached out to my friend who’s been a co-writer for Behemoth, I don’t know, 15 years now or longer, and he said "yeah I’ve got something for you" and he sent the lyrics over, and I automatically felt the music was connected to the words. And I was like "holy fuck, that’s amazing!" and I knew exactly how it must be sang [sic]. Once I knew that I was like "ok, this might work". I’m excited by it.

You know, for an extreme metal band, doing something that mellow - it’s always very risky, you know what I mean? But then, on the other hand, there’s a lot of sonically crazy stuff on the record, and I thought it makes the right dynamic and balance to take it down and make it more epic. I don't ’now, it just felt right.

HIGGO: Well your gut feeling must’ve been right, lots of people are loving it. Now you caused a bit of concern here when you dropped the Download line up early, did you realise that was the case?

NERGAL: No not really, I just got the news from my manager who told me that I have to put it online, but it was already so late in Poland so I said "ahh fuck it I’m going to post it now and go to bed", so that’s what I did. So when I woke up I saw that Blabbermouth and other websites were making a deal out of nothing like "Nergal leaked the line up" and I was like "ahhh c’mon, stop being dramatic about that" I mean you got.. ahh.. I mean.. whatever, c’mon.

HIGGO: We were bloody excited when we saw the lineup and it’s great to have you coming back to Australia, you obviously love coming here.

NERGAL: Absolutely and I’m sure I’ll be coming down a few days earlier. Just enjoy some of your weather and I know we start in Brisbane so I’ll probably be hanging out in Brisbane a couple of days before we start the tour.

Over the years I have been doing everything I can to avoid the Polish winter and get away to places where the weather is nice and that’s one of the places where I like to spend time.

HIGGO: Speaking of touring, you’ve been lucky enough to be on the Slayer Farewell Tour, and I know you’ve been vocal about them finishing up.

NERGAL: Well, I mean we got to respect that. It was definitely pretty striking and it came out of the blue. No one expected that to happen so everyone is kinda shocked, but not anymore. People are kinda getting used to the idea of them finishing. As far as I’m concerned, they are done. Tom Araya said "no" and they’re just… it’s not like KISS doing fuckin' ten farewell tours. Tom is retiring, he doesn’t want to do it.

It is what it is, but I’m just embracing the fact that Behemoth was privileged enough to be part of the tour and to be part of that historical moment, and we’re not done yet. We’re joining them in Australia and who knows we might extend the tour. If they extend to some other Asian countries I really hope they will ask us to open, which will be another dream come true. But I’m just taking it day by day. I mean it feels pretty weird, I just cannot imagine a world without Slayer. Won’t it feel weird?

But then I know for a fact that Kerry (King) has new music, and he played me that music that was supposed to be for the next Slayer album. It sounds as exciting as everything else they’ve done, so, things will happen for sure, it’s just a matter of when, and how.

HIGGO: Something else I wanted to touch on quickly after seeing the video on Facebook, was your dogfood treats you made.

NERGAL: Well it’s just part of the happening and I thought it would be fun to do ha ha ha, like there’s nothing behind it really, I just came up with this fucked up idea of releasing a dog food, and that’s what we did and it tastes amazing ya know for us human beings we can eat it, it’s not going to poison you, and .. yeah, it’s just part of the happening, you shouldn’t really treat that too serious ok? I think if there is any band who will ever come up with something like that it will always be Behemoth, keep that in mind alright? 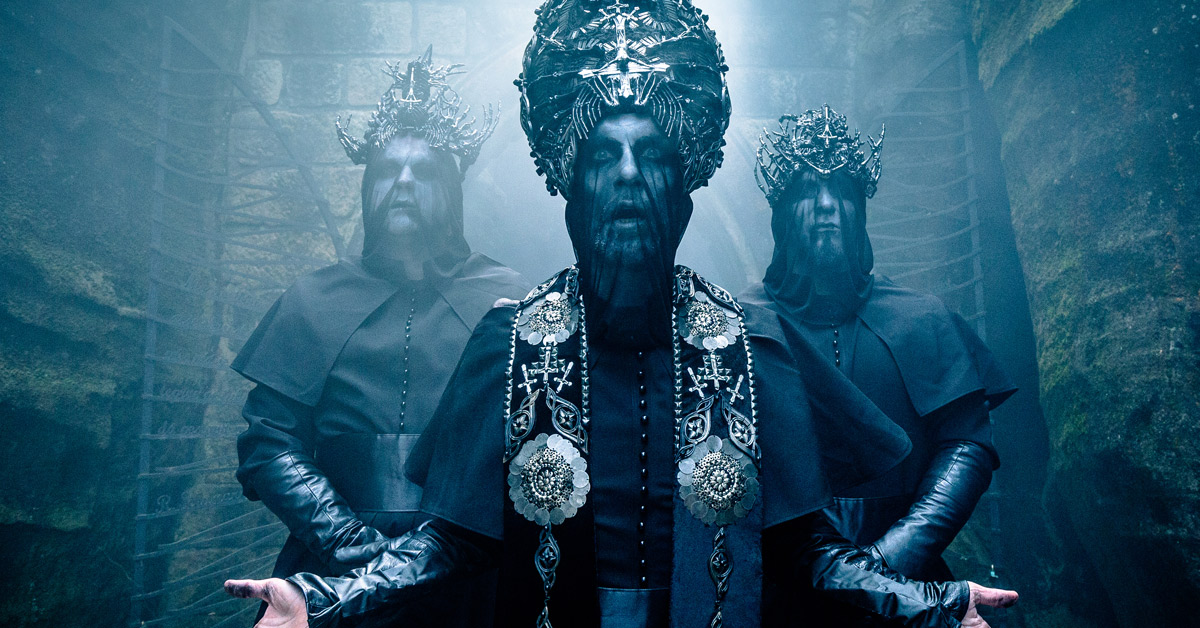