Trivium's ninth record What The Dead Men Say is out this Friday (April 24), so we were stoked to be able to jump on the phone with the band's longtime bassist/backup vocalist Paolo Gregoletto and chat about the vision going into the new album, what makes a great bass player and more!

Scroll on to read the full interview:

Hey Paolo, how are you going?

All things considered I'm doing well here, obviously very fortunate to be able to stay home and away from the public with my girlfriend and I've got a few dogs, so...it's pretty much just been me talking about the new album with a lot of people so that's been helping to keep me sane.

Glad we got to catch you here at Good Things last year before all this went down! Let's talk about the new record - it seems like Trivium has a pretty distinct vision with every new album, not just with the music but also the symbolic art and the visual aspects too. What was the specific vision for What The Dead Men Say?

I mean I think the main big thing going into this record was that we knew the last record [The Sin And The Sentence] was really well-received, and we felt like we really kind of found after years and years of doing different stuff - even though I think there's a through-line between every record we've done - but, stylistically, maybe having a different producer or drummer made things feel a little different.

I think with this one we wanted it to feel like a continuation of The Sin And The Sentence, but also enhance it by making it crisper, cleaner...we wanted the riffs to hit more, we wanted to let Alex [drums] go as far as he wanted with everything, so...if anything, I think the biggest difference with this record is that we really followed up the last one pretty closely, and I think that's kinda different for what Trivium's done over the years and what we've been known to do.

Do you feel that the lineup is at its strongest with Alex behind the kit for another record?

Yeah, I mean he's a really great guy and a great drummer, and of course we'd love for him to be the drummer of Trivium until we call it quits someday, hopefully well into the future (laughs), but we had a really great relationship with our writing, our touring together...it all really kind of feels really natural at this point.

Like, we haven't had any real growing pains and it hasn't been hard to see eye-to-eye on anything so it's been pretty smooth and I think the music has benefited from that.

So we know that you've contributed a lot of ideas outside of bass in the past - what was your input like this time around?

I guess for me I'm kind of like the utility guy with writing, because I've been playing guitar for quite a while so I'm able to bring in pretty complete thoughts with demos, and so any song I would have brought in...I would have brought in a lot of the riffs that made those songs, and of course a lot of lyrics and vocal ideas especially if it's a song I brought in.

If it's one of the other guys' songs I kind of help shape the lyrics and edit them a little bit, or maybe write some more lyrics. We're pretty collaborative with everything so I feel like by the time we get into the rehearsal room together, the individual demos become full band demos. We bring it through this, I guess you could say quality control of how we write before we ever get into the studio, and it's a couple-step process.

Has it been easier to write new Trivium records now with the technological advancements we've seen over the years compared to an early one like Ascendancy?

Yeah it's definitely easier to demo at home and get ideas down. I think the one thing we've had to learn, or in a way un-learn, is...well, there's kind of a detriment to having endless capabilities, and to be able to always try to perfect something without having to worry about recording to tape or some finite issue to keep you from recording an idea, I think we've had to learn self-limits on things.

Like, know when to call it, know when we've got the song. I think you can really drive yourself crazy with perfection using technology now, so it is a benefit of course, but you have to know some limits.

There's one track on the record called 'Bleed Into Me' which starts with a bassline and unravels around that - did that one start as a bass idea or did that come later?

Yeah, and sometimes I'll write with bass after I've written on guitar a couple of times, and I'll get burnt out on it and switch back to bass...I feel like a lot of times when I start with bass on a demo, it goes in a different direction that it would've with guitar, and that song definitely has that vibe.

So obviously you love playing in Trivium, because it's been your only project for over 15 years - what has kept you coming back for more after so long?

I just feel like we're a band that experiments and is willing to try things, and I think because we do that I've never needed something outside of this to feel fulfilled. For me it hits every box that I need for music.

Have you ever felt burnt out from metal from being around it all these years?

Nah man, I love metal music. I listen to metal every day - I'll skip around on Spotify listening to new and old things, discovering new bands is exciting for me and the best part now is that we can bring out new bands that we like...you know, whenever there's a new band that we're feeling, it's very possible that we can bring them out on tour with us.

To have that sort of power now (laughs) is a cool thing, because I feel like we're able to further the scene and get new stuff out there. And I mean, there's times where you get a little burnt on anything, and I like to listen to all kinds of music, so I'm never able to not listen to anything...but that's just what I've always loved and I don't see myself getting burnt out on it in the long-term.

Taking the chat on a bit of a left turn, but what do you think makes a great bass player?

Hmm...I think you really have to have good rhythm and good timing, of course there's ways around that in the studio, but I think live it's kind of hard to get around it without being down in the mix.

Being very responsive to a drummer and how they're playing, I think playing off the drums and knowing how to lock up with their fills...things like that can really change your playing, so when I go int he studio, I don't have to just lock into the guitars or the drums, I can balance between both and make my own parts out of that.

I think as you become attuned to the different players in your band, you can really make the bass a driving force within it and know when to pull back and also to give a little bit more.

It definitely seems like an instrument that's easy to pick up and play but really hard to master...

If you've come from another instrument though, that's a different story. Like, if you've played guitar you're gonna at least have an understanding of how to play a bass, but to really fundamentally understand it yeah, it's like anything in that it takes time...I can sit behind a drum kit, for example, and play beats fine, but I wouldn't consider myself a phenomenal drummer because I can play some simple 4/4 syncopated things.

Is there anything left to tick off the bucket list for Trivium as a band or for you as a musician?

It's really your music that's sort of that final thing to accomplish, and as long as you're making records and trying to put out great music then that will always be a challenge, and I think that's where we put all of our effort right now. We don't think too hard about where we're going to be at on festival bills, it's all just determined by the music itself and the reception from fans.

So when we put the effort into that the rest seems to work out on its own.

That's all we have time for unfortunately Paolo, but thanks for chatting with us and hopefully Trivium will be out on the road soon again and congrats on the new album!

Thank you, I really appreciate it!

You can pre-order What The Dead Men Say over on our webstore, including an exclusive Maniacs vinyl - head here to check it all out and secure your copy! 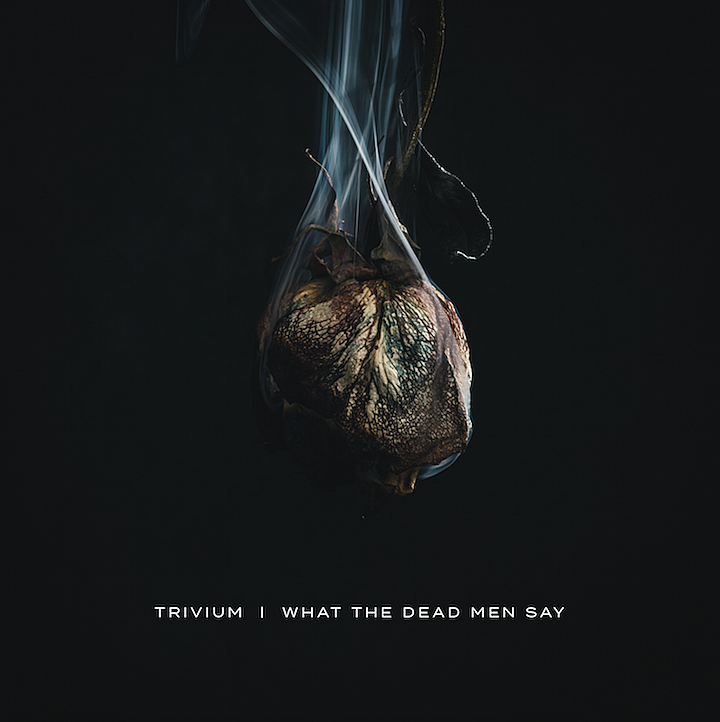 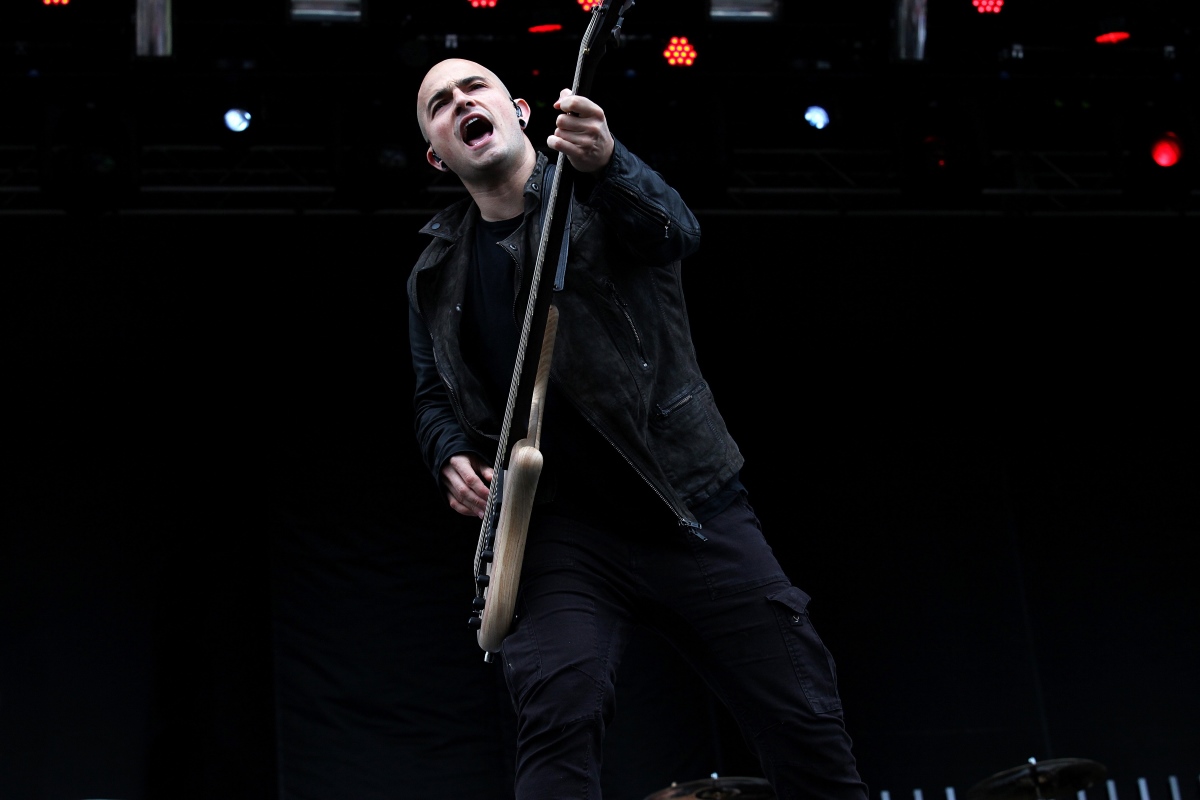