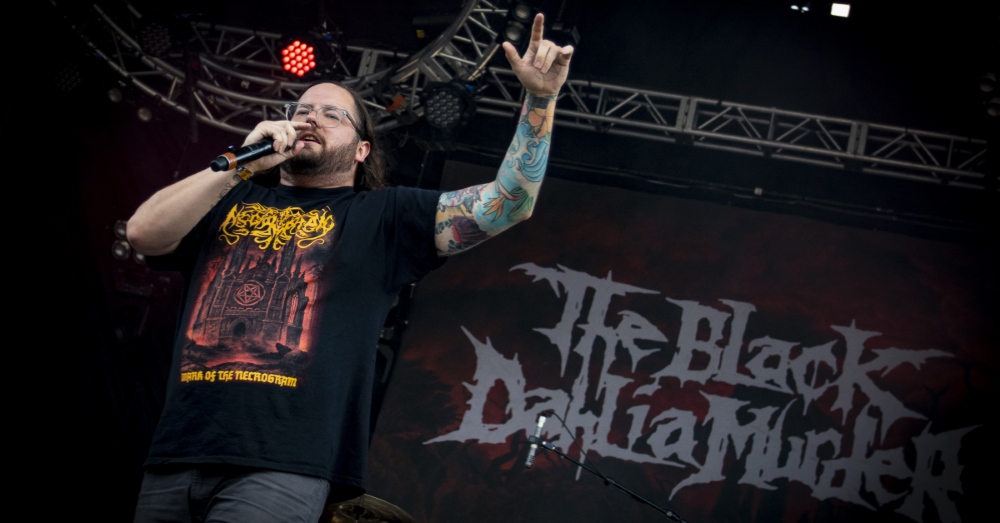 Death metal legends The Black Dahlia Murder are gearing up to release their ninth collection of plagues, Verminous, on April 17 - so we were stoked to be able to jump on the phone with vocalist Trevor Strnad to chat about all sorts of stuff including life in lockdown, video games, how he learned to do vocals and more!

Continue on for the full interview:

Good man, just kicking it at home from lockdown in New York City.

I was going to ask, and we'll get the elephant in the room out of the way, but how are you coping with the quarantine situation?

I'm doing really well I think, a lot of it is just focusing on the upcoming album and the excitement surrounding that, so at least I have something awesome to think about. I've been doing a lot of press which has been good, just trying to maximise the opportunity.

Otherwise listening to a lot of music of course, and playing video games - doing a lot of the great stuff you do when you're 15 years old. That's where my head's always at already so I was kind of built for this in a way, I think.

What games have you been playing?

Last night...well I've actually been dipping my toes in streaming on Twitch, I went live for the second time ever last night and I'm a Nintendo guy at heart, old-school NES.

So, I played Kung Fu, which I love...and yeah I just have an immense love for old retro games, and streaming was something I had been putting off for a long time. I've had the equipment just sitting here but I was nervous to take that jump, but there's nothing better to do now. It's a great time to keep people thinking about the band and get fans involved.

Do you wanna plug your Twitch channel for us so people can check it out?

Yeah of course! It's trevorstrnad.

Cool, so let's talk a bit about the upcoming record Verminous - it's got really grimy, rat-infested sewer themes across the whole thing. What was the inspiration for that?

Well you know I wanted to kind of draw parallels between the underground scene and actually being subterranean, so that's the sewer world that you see on the cover.

In the sewer world it's ridden with rats, roaches and undesirable creatures that the white picket fence side of life doesn't want to acknowledge. And we are the carriers of this plague of metal, this idea of the underground, the hidden world of the underground.

So I'm saying that we're spreading this plague, like a plague of knowledge and awareness. I'm also saying that there's a real strength in our numbers as metalheads, even though we're underestimated by society, kind of looked at as black-clad weirdos (laughs) on the outskirts of society, but there's a real sense of unity and family.

Also, these creatures are able to survive the apocalypse, which is very timely with what's happening right now. But yeah, the rats and roaches will be there after man nukes himself to death. Our culture is built to last, you know, you don't abandon it once you get in, it's just a way of life.

The production is pretty raw on this record too which kind of adds to those underworld vibes. I'm guessing that was deliberate?

Yeah we've been trying to be more and real with the last few albums. Trying to re-capture the glory of mid-to-late 90s recordings before Pro Tools kind of took over and made everything seem mechanical and lifeless.

So we're kind of bucking the new trends of quantising the hell out of the drums and making them right on the grid so there's no personality to it...or using the same drum samples, we keep them live and raw instead, and getting individual talents that will give the record personality instead of cookie cutter like so much shit that comes out now.

We had to look to the past and do it the old-school way. It was more painstaking to record all of the drums live and not cut and paste, slide everything around, and it's more painstaking to play the entire songs on guitar rather than just glue in the same riff ten times. We wanted this to have personality...there's no reason to take what the drummer does - the drummer we have (Alan Cassidy) is incredible, it would be an insult to his talent to quantise everything.

We even had this conversation a while ago about what makes those 90s records so classic and timeless, and we realised it was those production aspects.

You're obviously a huge fan of death metal yourself. We've spoken to some heavy artists before who say that being around their genre so much has kind of ruined it for them - how do you keep your love for the genre alive?

I'm just a total hound for the underground. Like, I watch every label big and small, all the different corners of extreme metal, and I just always have. I'm a big collector of metal CDs...I think I have something like over 4,000 of them, and I've just never lost that fan-hood, that fan approach of always wanting to hear new music.

In turn it keeps me excited to do what we do in Black Dahlia Murder, you know, it keeps me creative, keeps me thinking of new ideas inspired by all the different corners of metal. You know, also, I try to use my platform of being in a popular band to bring other bands up through different columns that I write and wearing different bands' shirts and championing all of it. Trying to give back to the underground, which is such a huge part of my life and existence.

Would you say that there are more boundaries to be pushed in death metal, or do you think it's all been explored already?

I don't know...it's hard to say, I mean it's always going in so many different directions. Like, there's bands that wanna be the most old-school and primitive, and then there are some that want to be the fastest and most technical, and I think that those boundaries are still gonna get pushed as we go on.

I think drummers will always be getting faster, I think players will be getting faster...but there's still things happening like with Blood Incantation for example, who have a really fresh sound steeped in old-school death metal, but it also kind of breaks that glass ceiling of death metal. It's so three dimensional and unique that they're making big waves with their sound, and they're a very special band for this generation. There's still room to innovate, and they're proof of that.

How and when did you realise that you could do metal vocals?

Well...I kind of new how to write vocals from doing punk bands as a kid, where I would just scream in more of a yelled voice, and when I heard that Brian (guitar, vocals), who is still my best friend and the other original Black Dahlia member, he was looking for a singer for this band and I thought, 'well I know how to write lyrics and pattern them, I just don't have the metal voice for it yet'.

So, the first couple of times I went to try out (for Black Dahlia), I don't think I sounded that great, but I had a lot of enthusiasm which led to me coming back. But the third and final tryout, I had kind of broken my voice in a little bit more and did a more primitive version of the vocals you hear now, with the high and low vocals.

But yeah, I still have an MP3 of that very tryout and I just remember being like 'wow, it's working! It's coming out right!' (laughs), and they seemed to like it, so yeah that was the day they asked me to join the band and we all went to a show together and started planning for the future. I remember it like it was yesterday.

Will that MP3 ever see the light of day or is it just gonna stay with you?

Um, it depends. I mean I, personally, don't have any bones about putting the demo-era material back out but Brian on the other hand, feels quite embarrassed by it I think. He thinks it'll tarnish our legacy to bring it to light more, but I think there will be a time when there's some kind of retrospective release with all of that good old stuff.

I think we're out of time Trevor, but thanks for chatting with us and congrats on the new record!

No worries man, thanks for the interview and the press, I really appreciate it! 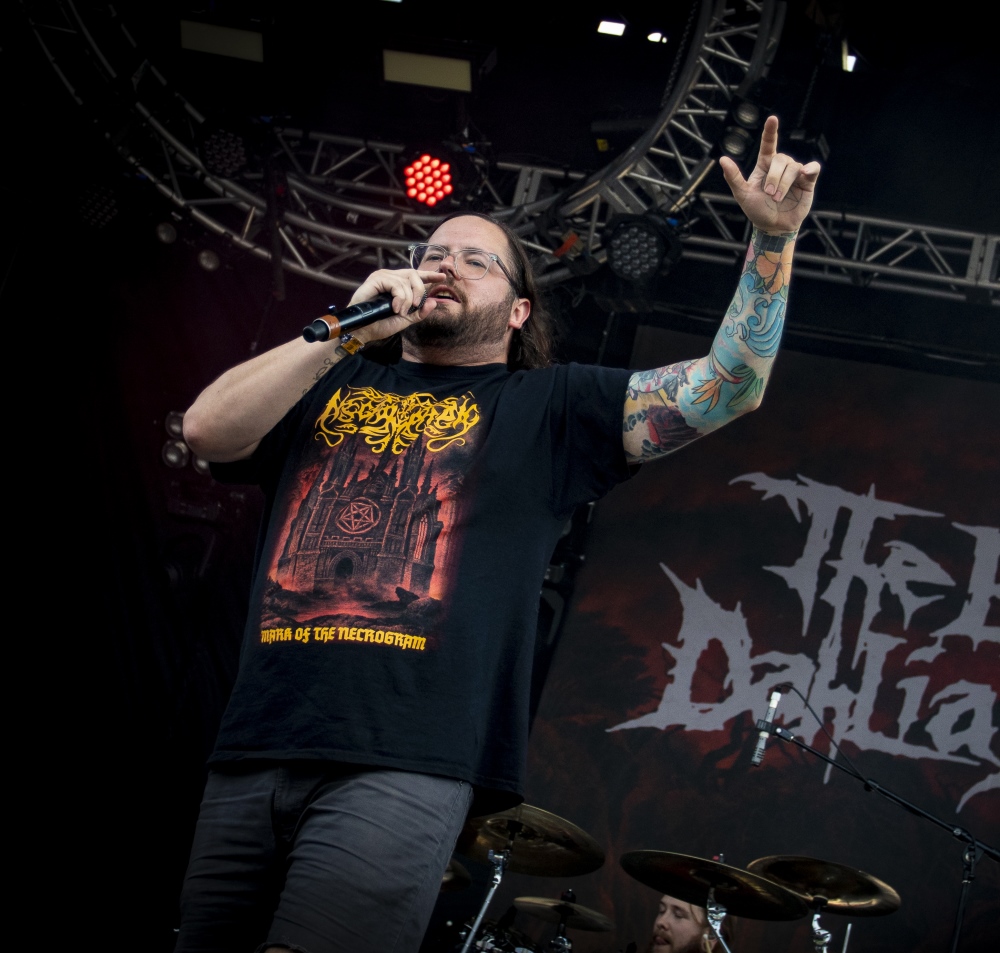